The Draft Part I – The Tower

At 16 all children of the Realm were conscripted into public service for two years. The ideal was away from family they would acquire self confidence and learn a trade or have an idea of what occupation to pursue after their return home. Connie saw the draft as her escape from a life she didn’t consent to and saw no other way to escape her confinement but through the draft. She was determined to make the most of her two years, and disappear from those that felt it was their duty to return her to a life she had no intention of returning to. 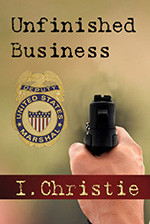 On her way to her vacation campground, Claire Hanson, a detective in the Petima Police Department, picks up the enigmatic MaryLyn Smith. While at the campground, a series of unfortunate accidents befall Claire, and MaryLyn is never around when they happen. Claire chalks it up to coincidence, but when her RV is raided by law enforcement officials looking for planted contraband and Claire is severely beaten in the incident, she knows these aren’t chance events. What she doesn’t know is whether MaryLyn is involved or not.

This is the edited version of Camping Out. It has been published in paperback and for an ebook download 2.99 charge.

Claire Hudson was on her way to a much needed two week vacation. Camping out where few human voices and the incessant noise people always insisted on carrying with them was her dream vacation. However, a lone woman walking on a deserted road adds more intrigue to her job she was hoping for some time off from.

Published under the title: Unfinished Business (That means an editor has gone through it and costs all of  2.99 to read the edited version. )

From the Chronicles of the Relic Hunters – Calose

Calose had three days to stay out of trouble on Dysta Space Station, a small station that did minor ship repair and at a reasonable cost. It seemed a safe idea to keep under the eye of the surveillance cameras so hustlers and pick-pockets wouldn’t bother her, but no loitering was allowed, and cruising through stores without purchasing anything caught the attention of the security bots. Her thought was to sleep the days away with a good reader in a sleeping cubicle but the ones in safe locations were already occupied. While she moved around she spied a potential spot to sleep, and when the station moved into nightshift, she settled for a light nap.  Her sleep was disturbed when a relic was dropped in her lap and for the next few days she spent trying to avoid relic Hunters, until she found who the relic belonged to.

Leona Bestolie legally ran away from home with the help of the lottery which required four years of public service. She signed up to work as a courier for an ambassador on another planet.  Her plan was after her four years she would be of age to legally make her own decision on what to do with her life, and hopefully she would be out of the reach of her family to stop her. An offer was made to send her to a school to see if she could pass the test to be an Observer working for who she only knew as HQ. Nothing military or acting as a spy, only Observing.  On her graduation she registered as an entertainer and hired a talent agent that wasn’t heavy handed with her jobs as long as she was a steady earner. She signed a contract as a dancer on a space cruise ship which spent ten months in space stopping at various space ports and planets. For nineteen years she balanced her work dancing and sending reports from the various ports of call to HQ. Unexpectantly her talent agent retired, selling her contract that had three more years to it, to a more assertive and ambitious talent agent. His plan for Leona was to mentor a troubled and difficult diva for ten months and in return, he would legally end her contract with him. This disruption of her routine life aboard the ship came at the same time a sudden change in leadership at HQ that brought a disturbing shift in the handling of the Observers.  Leona’s life took on a chaotic as well as life changing course though, not entirely unpleasant.

As a child Colleen dreamed of living amongst the stars. With the assistance of her aunt, she challenged the clan elders and became more than what she ever imagined, trained to be a star traveler.

Merker’s Outpost has a secret that spans galaxies. Below its hostile, barren red surface, a once-thriving research complex now lies seemingly deserted, watched over by an entity called Guardian. Lieutenant Harriet Montran, a Collective Space Centurion officer, is betrayed by her shipmates and stranded on Merker’s surface. She is rescued by Guardian, who enlists her aid to evict a group of smugglers who have set up base in one of the Outpost’s underground cities. Major Zohra, an undercover operative for the secret watchdogs of the galaxy, Naboth’s Vine, is also on Merker’s Outpost. She has infiltrated the smugglers with the intent of ending their illegal trafficking in sentient beings. Montran and Zohra join forces with Guardian to thwart the smugglers and protect Merker’s Outpost. Soon, the bond that joined them when they were cadets flares anew. Confronted by smugglers, renegade soldiers, programmed assassins, and betrayal within their own ranks, Montran and Zohra are caught in a desperate race to discover the planet’s secret before it falls into the wrong hands. Can their feelings survive it? Can they?

Buy it Now at Smashwords.com

Ready for Part II? Alex and Elizabeth settle down to living as a couple in Sunrise, both trying to balance their occupations while learning about intimacy. Elizabeth, no longer bait to a stalker, and Alex no longer working for a covert operations agency find they still have enemies to protect themselves from.

What can a frustrated weekend artist do when an unexpected windfall drops in her life after the loss of her lifelong supporter, her mother? Shelly Abbot’s passion and relaxation was her art, which unfortunately took a backseat to her major distractions and stresses. She had a difficult supervisor at work, was still recovering from a heartbreaking relationship, and wasn’t able to face prospective customers to sell her art. Her mother offered her help as a partner, to sell the art work that was taking space up in her garage. Reluctantly, Shelly agreed, knowing it meant the customers would want to meet the artist. So when her mother died, an unimaginable change in her life occurred.  She inherited more money than she could imagine, which gave her free time to work on her art, have a designed workshop, and hire an art agent. However, with the money came responsibilities and new relationships, as old and new required her to work on her social skills. Also, in both the art world and her new financial world, she has unexpected challenges that are dangerous and sometimes life threatening.

Alex was dispatched to the Los Angeles Federal Building to deliver a packet of documents for Chief Harper of Sunrise. While in the area, Alex had a chance to interview a prisoner in the Orange County jail. She had information on a hit list Alex had been trying to find the owner to. On Alex’s way back to Sunrise she is kidnapped and left for dead. Elizabeth makes friends with someone she meets on the beach and brings her home.

Stories by I. Christie unedited and edited